I love King Arthur Flour .  If you love baking and haven’t seen their website, you really have to visit ~ but make sure you have some time because it’s just chock-full of good stuff.

I subscribe to their publication called The Baking Sheet and the early spring edition came in the mail yesterday.  I always find several things I want to bake in each edition but this time I want to make EVERYTHING.  It is calling to me, LOL!

This morning I went ahead and made the doughnut recipe.  Very easy to make ~ no yeast involved so they won’t be the light airy kind ~ and really only took about 30 minutes from start to finish.  I did find that I needed to add more milk (about 4 tbsps more) and I’m guessing that it’s because my mashed potatoes were really dry (I cooked them yesterday and stuck them in the fridge and mashed them this morning with a fork).  So just watch out for that if you make these doughnuts.  The recipe says you can use leftover mashed potatoes but I’m unsure whether the recipe is taking all the stuff that’s added to the potatoes into account so I just made fresh with no additions.  Everything else I did pretty much the same as the recipe including dredging in cinnamon-sugar but you can put anything (or nothing) you like on them. 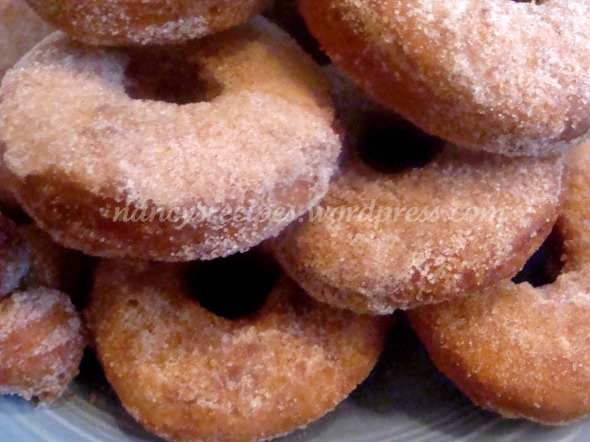 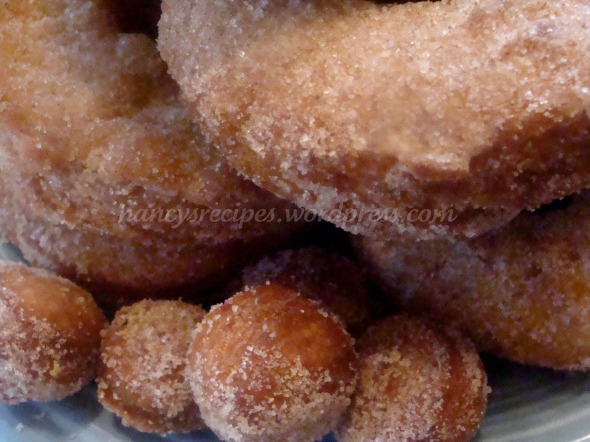 3 cups flour (may need up to 1/2 cup more if your potatoes are really moist)
3/4 cup sugar
2 tbsps baking powder
1/2 tsp nutmeg
1/2 tsp salt
1 cup mashed potatoes (I used two “on the smallish side” potatoes)
3 tbsps butter, softened
2 eggs
1/4 cup milk (I needed about 4 tbsps more milk and if you need more, just add a little at a time so you don’t get too much)
1 tsp vanilla
Oil for frying
Cinnamon sugar for sprinkling or whatever floats your boat

Combine the flour, sugar, baking powder, nutmeg and salt in a large mixing bowl. Add the potatoes and butter ~ I found that mixing it in with my clean hands incorporated both easily.

In a measuring cup, put the milk, eggs and vanilla and mix right in the cup and then add to the flour mixture and stir until everything is combined nicely. Roll the dough out on a floured surface to about 1/2 inch thick. Cut with a doughnut cutter (I used a cutter that I bought at KA years ago 🙂 )

Now for the frying part ~ I have a Cool Daddy deep fryer. KA says to heat your oil to 360º but it wasn’t hot enough in my fryer so I went with 375º and it worked perfectly. If you are going to try these, start out at 360º because it may very well be hot enough for you. You can always make it hotter. Fry the doughnuts until brown on each side 1 minute or so per side, turning them with tongs.

I line a cookie sheet with several layers of paper towels and let the doughnuts drain on that when they come out of the fryer and then I dredged them in the cinnamon sugar.

I ended up with about 17 doughnuts after I re-rolled the scraps plus the doughnut holes.

Welcome to my kitchen!

A recipe a day? More or less. I have collected recipes for many years and I am a cookbook hoarder so I decided that I am going to start posting our favorites!
Follow A Recipe A Day on WordPress.com

Nancy @ A Recipe A Day

"The thing about eating the Black and White cookie, Elaine, is you want to get some black and some white in each bite. Nothing mixes better than vanilla and chocolate And yet somehow racial harmony eludes us. If people would only look to the cookie all our problems would be solved." - Jerry to Elaine (Seinfeld, Season 5, The Dinner Party)

a whisk and a spoon

Good food, seasoned with a dash of life